The Discovering Math Club was created in the year 2003 and since then it has been one of the most successful organizations at the Wolfson campus.  One of its main objectives has been to present and discuss important topics in Mathematics not covered in our regular courses. Some of those topics are just about elementary mathematics facts. Others encompass various topics usually covered in more advanced courses. Some of the topics that have been discussed are:

Nowadays, The Discovering Math Club is one of the most active organizations at Miami Dade College, with a very concise plan of action under the supervision of professors Alvio Dominguez and Arturo Presa. Any student interested in joining the club should contact either one of them. Professor Dominguez can be reached at adoming1@mdc.edu  whereas professor Presa can be contacted at apresa@mdc.edu respectively.

Another important task achieved by the club has been the constant training of students for math competitions. The most important contest we have targeted is the annual statewide Math Olympics. Such a prestigious event has been held in the city of Jacksonville for many years, and members of the Discovering Math Club have participated every year competing against other teams representing other colleges in Florida. So far, the results have been extremely satisfactory.

Below are found some pictures and published articles depicting the most recent events at which the Discovering Math Club members have excelled and proven their tremendous drive for success.

In the year 2019 the team comprised by the students Giacomo Nagaro, My Nguyen, Tomas Fiure, and Franklin Bello obtained the third place at the Math Olympics. 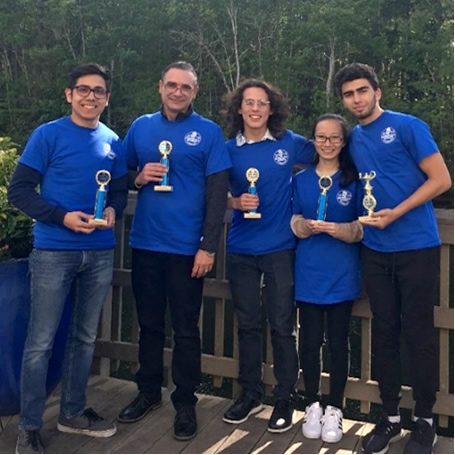 The Mathematics Club at Wolfson Campus placed fourth in the team category at the Florida State Math Olympics on April 14 at the University of North Florida in Jacksonville. “It is indeed one of the most rewarding memories I will carry with me from this academic year,” said Alvio Dominguez, the club’s advisor. “Being among the winners in such prestigious and challenging event is something that those students will remember for the rest of their lives.” The team consists of Cesar Cardoso, Camila Dominguez, Alexander Loureiro and Christian Yaques. The Florida State Math Olympics is divided into two individual categories and a team category. Questions varied from basic math up to calculus II. “Winning fourth place was such an immense accomplishment,” Dominguez said. “Keep in mind that we were competing against the best students in the entire state of Florida.”

View The Reporter article regarding the 2018 Wolfson Campus team.

The Wolfson Campus Mathematics Club placed third in the team category at the Florida State Math Olympics held on April 15 at the University of North Florida in Jacksonville. Noel Membreno, a mechanical engineering major who graduated from Miami Dade College this spring, also placed third on the individual category. “Winning third place in the team portion of the Olympics was such an immense accomplishment…” said Alvio Dominguez, the adviser for the club. “It is one of those feelings almost impossible to explain, but extremely rewarding. One of those experiences that will stay forever.” There are three events in the competition: a 40-question multiple-choice examination and two 10-question free-response examinations, one with calculators allowed and one without calculators.

In the year 2015, the team comprised of the students Orlando Ferrer, Sarah Ser,  Dieff Vital,  and Jorge Marrero obtained a third place at the Math Olympics.

View The Reporter article regarding the 2017 Wolfson Campus team.

Return to the Wolfson Department of Mathematics home page.