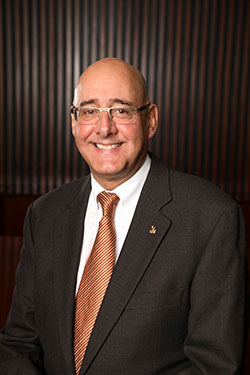 Rolando Montoya was called to serve as the interim president of Miami Dade College (MDC) in August 2019. He retired as provost for operations at MDC in 2017, and previously served the college in various ascending capacities between 1987 and 2017. As MDC's former chief operating officer, he had jurisdiction over finance, information technology, institutional effectiveness, human resources, facilities, legal affairs, resource development, and emergency preparedness.

Dr. Montoya's prior positions at MDC included Wolfson Campus president; dean of Academic Affairs, Kendall Campus; chairperson of Business, Kendall Campus; and professor of accounting, finance, economics, and statistics at the North Campus. Before joining the college in 1987 he worked in the private sector in the fields of accounting and finance and served as Consul of Costa Rica in Miami.

Dr. Montoya is a past chairman of the board of directors of the Miami Branch of the Federal Reserve Bank of Atlanta. Other board memberships include CareerSource South Florida, Citi Postsecondary Success Program, Miami Downtown Development Authority, Disney College Program, New World School of the Arts, Epiphany Catholic School, and South Florida Center for Financial Training. He received a doctorate in Higher Education Administration and a MS in Finance from Florida International University, a BBA from the Technological Institute of Monterrey, Mexico, and a licentiate degree in Business from the University of Costa Rica. He is a Certified Management Accountant (CMA) since 1992 and a Certified Financial Manager (CFM) since 1997. Some of his awards and honors include One Hundred Latinos-Miami, the MDC Presidential Merit Award, the Barnett Bank Endowed Teaching Chair, and the Sun Trust Bank Endowed Teaching Chair. He and his wife, Marivi – a retired administrator with Miami-Dade County Public Schools, are the proud parents of three adult children.